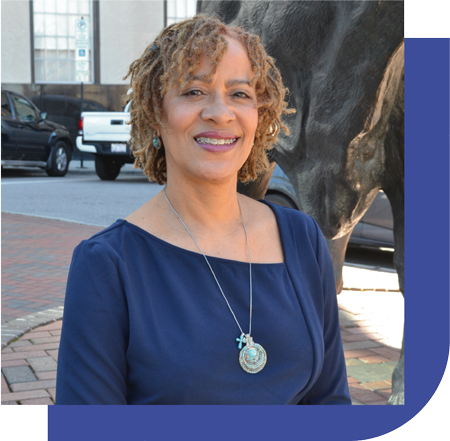 Elaine M. O’Neal is a native of Durham, North Carolina. She grew up in the West End Community. She spent many days in the “Big House”, which is now the Pauli Murray House and is proud to walk in Pauli Murray’s footsteps.

Elaine is a trailblazer: she was a District Court Judge for 17 years and was the first woman in Durham County to be named Chief District Court Judge. In the 1990s, she was a pioneer and advocate as a judge around same-sex adoption, supporting LGBTQ families in North Carolina. In 2011, she was elected the first woman Superior Court Judge in Durham County. In 2015 she was appointed as Chair of the Superintendent’s Code of Student Conduct Task Force for Durham Public Schools where she worked to dismantle the school-to-prison pipeline. She retired from the bench in 2018 to lead the NCCU School of Law as Interim Dean. In 2018, Mayor Steve Schewel appointed her as Chair of the Racial Equity Task Force for the City of Durham, where she led a diverse cross-section of Durhamites to create policy and budget recommendations on complex issues.

She is proud of her deep Durham roots that hold many family members in Durham, including several beloved children and grandchildren. She is a member of several organizations including First Calvary Baptist Church, Durham County Bar Association, George White Bar Association, and Delta Sigma Theta Sorority, Inc. She is a Board Member of Made in Durham. Elaine has the heart of a public servant and a deep abiding love for her hometown and for all who choose to call Durham home.